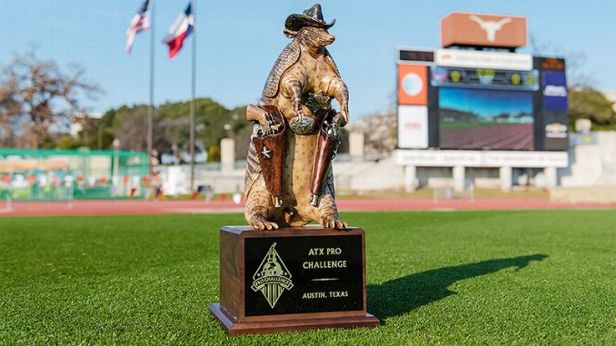 Austin professional soccer remained nothing more than a dream into the middle of the year.  After USL’s Austin Aztex went on hiatus at the end of the 2015 season, since there were no acceptable stadium options, no professional or even high level amateur teams remained in the ATX metro area.  That all changed in a huge way in the second half of the year and inserted Austin straight into the middle of a nation-wide battle over the “soul” of soccer in this country.

It all started out quietly.  On August 9th, USL announced that a new franchise would be awarded to Austin to begin play in the 2019 season.  The team would be owned by Circuit of Americas Chairman Bobby Epstein and would play games in an upgraded version of a stadium that was being built on the racetrack grounds for the new FC Barcelona Academy being established in Austin.  The only controversy over this announcement was the stadium location, SW of Austin near the airport, outside of the city core that many Austin soccer fans wanted to see it located.  Epstein even wrote a very transparent letter to ATX soccer supporters explaining why the COA location was the only viable place a stadium could currently be built in Austin for a USL team.

Then on the night of October 16th Grant Wahl of Sports Illustrated dropped this bomb on Twitter:

The soccer world hasn’t been the same since.  In protest Columbus Crew fans organized a nationwide movement (#savethecrew) on Twitter that, among other things, has led to (1) an online Save the Crew petition with more than 12,750 signatures now (2)  Save The Crew banners appearing in strange non-soccer related stadiums and other places all over the country (3) solidarity statements from supporters groups at all levels of soccer in the U.S., including other MLS teams.  The furor has not died down.  Don Garber’s State of the League presentation before MLS Cup in Toronto a few weeks ago was basically hijacked by constant questioning from reporters about the move from Columbus.  Additionally, Austin soccer supporters have unfortunately taken some of the backlash over a move they had nothing to do with and it has gotten ugly at times.

All of the sudden Austin and the city’s politicians were dropped into a situation that nobody, unless they were hiding it well, saw coming.  The timing of the announcement was strange too, coming in the middle of Columbus Crew preparations for the MLS playoffs.  Since this announcement it has become clear that whether Columbus moves to Austin is dependent on two factors.  First, an acceptable “City Core” stadium location. Second, substantial demonstrated corporate support (e.g., stadium naming rights, jersey sponsorship’s, etc.) that will allow Precourt Sports Ventures (PSV) to secure the estimated $200 million that will be required to build the privately financed stadium.  Meanwhile the USL franchise that Bobby Epstein purchased has been placed on hold.  BTW, MLS claims that Columbus still could retain the Crew, though the two sides seem to be at an impasse.  When Dave Greeley from PSV held a Q&A with ATX supporters in October (summary below), he certainly was talking like Austin was the ultimate destination for the Crew.

The city council has now postponed any further discussion about soccer stadium locations until February 2018.  An election is likely if city parkland, which seems to have some of the best choices to meet PSV criteria, is selected for a stadium location.  As would be expected, political posturing from many different constituencies, both for and against certain locations, is gathering.  The comment boards are rife with idiotic suggestions such as putting temporary bleachers in Zilker Park for the MLS team like they use for Austin City Limits.  The Austin American Statesman recently wrote an editorial that rightly took PSV to task for a preferred stadium location that included no parking.  They also took the opportunity to demand more booty (in the form of “economic reciprocity”-other than the $200 million that will be spent to build the stadium and revenue from stadium events) from PSV for the parkland.  PSV has already said they will do this anyway, but one believes if any other professional sports league decided to add a team in Austin we wouldn’t have anywhere near these kind of demanding and helpful “suggestions” being made.

The Crew have announced their intention to move to Austin for the 2019 season.  Having lived through one relocation in Houston when the Dynamo had four months in 2005-06 to move and establish a team, I know this has the potential to end badly for MLS in Austin the longer this whole process drags on.  The Crew are absolutely right to have the stadium location nailed down before agreeing to a move.  The Dynamo moved to Houston with no stadium plans in place and despite hiring the best choice, Oliver Luck, to guide the stadium effort, ran into significant challenges over a five year period before stadium construction was approved in 2010.  The Dynamo did not occupy the stadium until the 2012 season.

Finally, domestic professional soccer in Texas has always been a tough sell.  The new Austin team will need time to educate and prepare the market before beginning play.  Good World Cup, EPL and LigaMX TV ratings are one thing.   Getting 20,000 people to show up for 17+ MLS games each year, many of which will be played in 90 degrees or hotter weather, is something completely different.   The recent success of MLS teams in Orlando and Atlanta (and seemingly for LAFC) is directly related to having substantial lead time to engage fans and sell tickets prior to starting operations.  The Dynamo never had this preparation time and it seemed like it took years for the general public to even know there was a team in town. Perhaps Austin is different than everywhere else in Texas for soccer, though I have my doubts.  It certainly is not as big or complex a market as the two current MLS teams, DFW and Houston, navigate.  PSV should take all of these issues into consideration if they want MLS to be successful in Austin, because there are no guarantees.  Despite the avid support from a small number of local fans, there doesn’t appear to be a grass roots clamoring for MLS in Austin.  Time is the enemy here and 2019 may be a real challenge given what has transpired to this point.

Those are all issues for 2018.  The prospects for professional soccer are certainly much better today than they were even six months ago and that is a good thing.

BTW, as a footnote, in the middle of all the MLS hullabaloo in Austin, the United Premier Soccer League, which is establishing operations in Texas for the first time in 2018, announced a Round Rock expansion team for 2018.  Also Central Texas Lobos from southern suburb Kyle will also begin play in the Gulf Coast Premier League in 2018.  From nothing to a plethora of teams in a few short months.  A luxury of riches for Austin soccer appears to be on the way.