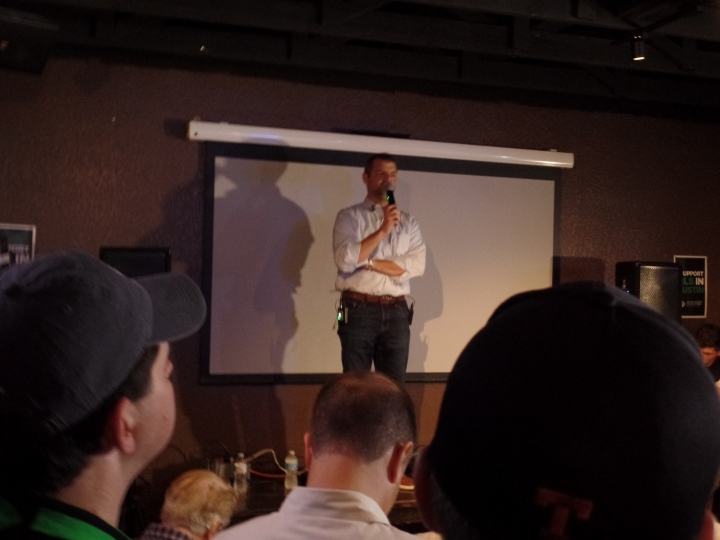 Precourt Sports Ventures (PSV) President Dave Greeley visited Austin Wednesday evening to meet with the Austin soccer community to discuss a potential relocation of the Columbus Crew to the city.  There were no huge revelations in this meeting, but from my perspective the main takeaway from the event is that any future move of the Columbus Crew to Austin is mostly dependent on first, securing a site for a stadium that meets the criteria that PSV believes is necessary for a modern MLS location and second, achieving enough financial support from the Austin corporate community to finance this new stadium.

Below are the highlights of the short presentation and subsequent Q & A:

During answers to specific questions about the stadium, Dave Greeley:

(1)  Reinforced that a location in the Downtown Urban Core is critical.  When asked how many miles from the center of Austin this meant, he wouldn’t quote a figure.

(2)  Also reiterated that the stadium would be privately financed and stated, when asked about PSV’s long term commitment to Austin, that financing a stadium that costs $150-250 million dollars is a serious way of saying “I Do”.

(2) Stated that if they only had one option to move to Austin and it was Darrell K. Royal-Texas Memorial (UT football) stadium that they wouldn’t move there.

(3) That whatever “world-class” stadium is built:  it would be authentically Austin, connected to the site selected and surrounding neighborhoods and community.  He referenced 20,000 seats as the size.

(4) Discussed the importance of the resolution in front of the Austin City Council at a November 9th meeting that would allow the City to work with PSV to evaluate city owned land (including underutilized park land) near the city core for a possible stadium site.

Additionally, he stated in answers to other questions:

(1) No deal is in place with the University of Texas for use of the Mike A. Myers Stadium and Soccer Field as an interim home for a potential relocated Crew starting in 2019.

(2) When asked about when a final decision to relocate to Austin might come, he stated that he didn’t have an answer but specifically talked about the time that would be needed to identify a stadium site and the communications involved in this process.  He talked about the urgency of the effort and that he wanted the decision to be sooner rather than later.

(3)  In the context of a question about Southeast Austin, he mentioned the need to build a world class training facility to house the first team and academy.  He did not commit to any specific location for this facility.

(4) He talked at some length about the business involved in financing a stadium (need for collateral assets in the form of presold contractually obligated income) and stated that without corporate support in Austin “I hate to say it, this probably won’t work out”.

Specific comments about the Columbus situation:

When asked to address the reports of a clause allowing the Crew to leave Columbus for Austin-Greeley used it as a platform to briefly share comments on the Columbus situation:

He first said that he didn’t want to talk about Columbus, because the meeting last night was really about Austin, but he did want to make two comments on Columbus.

First that there is a dedicated, avid engaged fan base of the Crew that is as strong as many teams hardcore supporters base.  The challenge, though, based on 22 years of history is that the Crew don’t have broad based community support, and that secondly, they don’t have the corporate support they need in Columbus.

Second, he went on to comment about Anthony Precourt and the criticism he has taken after the potential move was announced.  He said that Precourt is of the highest character, the highest ethics and a successful individual…one who loves the game, played it, has seen it around the world and that he is one of the finest owners in Major League Soccer.  Greeley then commented that Precourt had been dragged through the coals and that he has been misrepresented.  He then finished by saying that Precourt would be a great owner for “our club in Austin Texas”.

Finally, I was quite surprised that Greeley’s opening remarks included a statement that PSV views Austin as a conduit to soccer in the rest of the Western Hemisphere.  He stated that he believed that international competitions in CONCACAF region, at some point in time, would give UEFA a run for its money.  Most previous discussions about MLS long term goals from the league office have focused on comparisons to European leagues.  I can’t personally remember a comment from a team or league executive about the future of an MLS team being so connected to Latin America.

I do believe a refocus to the Western Hemisphere is intriguing (and a great opportunity for Texas teams) for two reasons.  First, the overwhelming success of Copa America Centenario, despite limited organizational time, played in the United States last year.  Second, UEFA will be implementing a new tournament in late 2018 called the UEFA Nations League.  Though great pains are taken to state that this new tournament doesn’t mean the end of International Friendlies, there clearly will be fewer opportunities for the United States and other countries in the Americas to play friendlies with European teams in the future.  The best place to replace these missed competitive opportunities is within the Americas, potentially with a tournament modeled similarly to the UEFA competition.