Albion Hurricanes FC, a Houston, Texas youth soccer club founded eighteen years ago, has ambitiously expanded through the years to construct a program that now comprises dozens of boys and girls youth teams who train and play at multiple campuses in the western half of the city.  This growth has produced a deliberately constructed pyramid that allows players to progress from recreation to high levels of youth competition in an integrated pathway.   Last October the club announced the next step in their evolution, the creation of a new Premier Development League (PDL) team that further demonstrates their commitment to produce players capable of competing at college and professional levels.  This new Houston team, AHFC Royals, will be one of two new Texas expansion teams joining the 74-team PDL for the 2018 season.

The PDL, part of the United Soccer League (USL), is one of a handful of leagues that comprise the unofficial fourth-tier of the US Soccer League system.  Featuring mostly college and other youth players, who are able to retain their amateur status, the PDL season runs from May to August.  There are 6 Texas teams in the PDL Mid South Division, four in south Texas and two in the north.  The Royals and Corpus Christi FC are the two new Texas teams added this season. 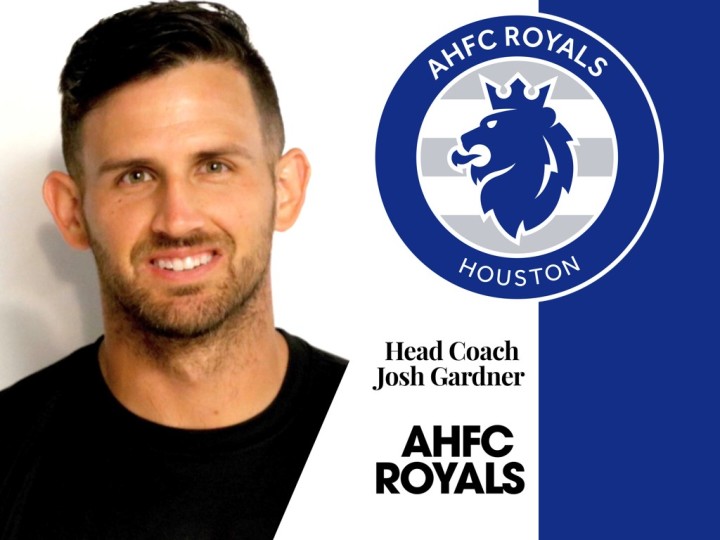 One of the Hurricane’s own, Josh Gardner, was recently named as head coach for the Royals.  Josh, who played his entire youth soccer career with the Hurricanes, went on to a successful career at the University of Cincinnati, a stint in the PDL with the long gone Houston Toros and finally in USL and Major League Soccer (MLS), where he played for 4 different MLS teams during his nine year career. After finishing his MLS career at Sporting Kansas City (SKC) in 2014,  Gardner joined the clubs Academy coaching staff.  Early in his professional playing days, Josh had decided he was interested in coaching after he hung up his boots.  At all stops in his career he always tried to coach one or two youth teams and was also able to complete his B coaching license before his retirement.  During his stint at the SKC Academy he coached at one of the club affiliates and also spent two seasons coaching Sporting’s youth Development Academy teams.  While at SKC, he was also able to secure a US Soccer A license and become one of a select few that have completed the Elite Formation Coaching License, a joint program between Major League Soccer and the French Football Federation.

When his contract with SKC finished in June of last year, Gardner decided to move back to Houston with his family and take a job with his old club as Director of the Boys Elite Clubs National League (ECNL) program.  Shortly after he joined the Hurricanes, the club announced its expansion into PDL and, after his joint ECNL and PDL responsibilities were sorted out, Gardner was named as as the Royals inaugural head coach.   In an interview last week, Josh shared why he decided to move back to Houston and take on these new roles.

“There are so many good players, but not a lot of good players coming out of Houston signing professional contracts, so I wanted to come back and take on the challenge of trying to develop players for the next level.”

The Royals will join a crowded high level amateur landscape in the Houston region. Multiple PDL, NPSL and UPSL teams either play, or will begin play, in the Houston area in 2018.  Gardner is not fazed by this and believes the market is big enough to support all of these clubs and more.  “The Houston area is so big, you have the ability to have multiple clubs.”  He also believes that Albion’s club philosophy of seeking the best path for each individual player and proximity to the Houston Dynamo creates the potential for exposure to a professional club that many PDL players and teams in smaller markets do not enjoy.  He cited goalkeeper Michael Nelson, who signed a professional contract with the Dynamo last week after a successful college career at Southern Methodist University, as a role model for Albion and Royals players at all levels.  Nelson also played his entire youth career with the Hurricanes.

Gardner is currently building his roster for the upcoming season.  17 of the 25-30 players he ultimately plans for his first year roster are in place now.  Not surprisingly the club is focusing its recruiting efforts on the large number of players who have advanced from Albion youth programs to college soccer. Gardner discussed why the step into PDL is the next logical evolution on the Albion pathway for its former and future Hurricane graduates.

“We don’t want them (our former youth players) to go to college and never see them again.  We want to make sure we are instrumental in that development as well.”  Gardner continued, “Whenever they come back from school hopefully we can get quite a few of our college players who are coming back and want to play and are trying to make it as pros.”

Gardner also plans to add Albion youth players, who will be entering college in the fall, to the roster.   Additional even younger players, who are also capable of playing at a higher level, could join the team this year as an introduction to the rigors and daily commitment required to play at the next level.

In addition to these homegrown players, Gardner estimates that roughly one-third of the players he has recruited come to the Hurricanes from other countries.  Some of these players were identified through connections he established in France while pursuing his Elite Formation Coaching license.

The remainder of the roster is projected to be filled by other players from the Houston region capable of taking the next step, including slightly older players who will help provide leadership to the young roster.  The club will be holding tryouts on Saturday, March 10th to help identify these players and Gardner also notes that he is able to tap into the reservoir of contacts that other experienced Albion youth coaches have in the community.  He emphasized that the team has, and will continue to be, very selective in its roster construction.

“It is important for me to find players who have a passion and vision of playing at a professional level.”  Gardner added, “Everybody has to have a culture of excellence.  We want to be competitive right out of the gate.”  He hopes to have his roster essentially finalized a few weeks after the completion of tryouts and plans on beginning training in early May.  In addition to the compacted PDL schedule, part of the reason for the large roster is that some of the players will not be able to join until after the season begins due to university academic calendars.

The club will play its matches on the modern FieldTurf at Tully Stadium, a Spring Branch ISD multi-use facility in Houston.  To further demonstrate Albion’s commitment to its PDL expansion, the club has plans to build a new stadium at its current West Houston grounds in the next few years.  When completed this facility will serve as home for the Royals and the new Women’s Premier Soccer League team Albion is also starting up this year.

Gardner’s coaching staff is in place for the 2018 season.  The Royals assistant coach is another former Hurricane, Jorge Carrasco, who also played with Cruz Azul youth teams in Mexico.  The goalkeeper coach is Brett Collier, a St. Mary’s University player who served as a graduate goalkeeper trainer at the college after his graduation in 2010.  The Royals will rely on established relationships with other Albion partners to fill out its medical and other training needs.

Gardner is excited for the start of the PDL season and the demonstrated long-term commitment Albion is taking to become the soccer development program of choice in the Houston region.

“The PDL club is the first part in us being the best club in the Houston area because we have our pathway which is even higher than other clubs.  We want to produce players for college and potential professional careers.  That is our focus and our goal is to provide those opportunities for our players.”

The PDL Mid South Division is highly competitive.  In addition to Corpus Christi FC, four second-year Texas teams and defending Division champion OKC Energy U23 promise to create plenty of challenges to the Royals ambitious goal to make the PDL playoffs in its inaugural season.

Gardner believes the Royals are up for the challenge, but initially is focused on the first steps of a long-term project designed to produce more elite soccer talent from Houston.  “I want our PDL program to be lasting and to be a place where players want to come play in Houston.  That is our main goal.”