Tomorrow I will begin rolling out Texas Soccer Journal’s picks of the Top 10 Texas soccer stories of 2017.  Before beginning the countdown, one final post (this one about tifos) in the “favorites” series I have shared over the last week.

If you missed them, here are links to the previous posts in the series:

I freely admit that I am not a Tifo scientist.  These masterpieces by Supporters Groups are something that unfortunately bypassed my generation.  I do like a good one though and I wanted to share a couple that I enjoyed this year.  Since I attend more Dynamo games, it probably was a given that it would come from BBVA Compass Stadium.  This one, unfurled by the Dynamo supporters before the first leg of the Western Conference Championship against Seattle, was world class.  Sadly, nightmare is a pretty good description of the Dynamo’s performance that night, but it doesn’t take away from the great work on this tifo. 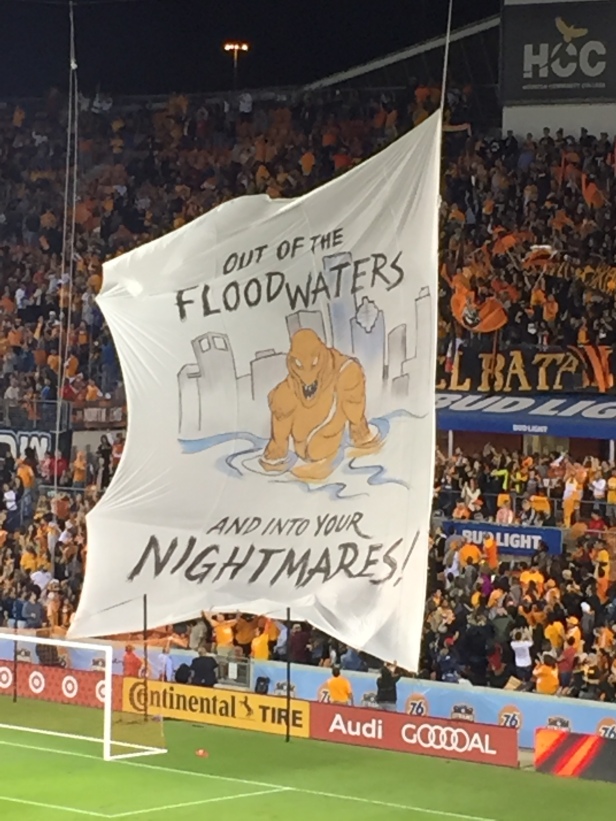 I don’t want to ignore the FC Dallas supporters though.  They are a pretty creative bunch too.  I remember a couple of great Tifos from the March 18 opener against New England that were highlighted by Carter Baum in one of his mailbags.

"Unfinished Business. The Hunt for MLS Cup." @DallasGuardians conquer through a broken pulley line with a nice tifo of their own. pic.twitter.com/APcQc5wFUx

"When Dallas beats you in the Open Cup Final."

Finally, my blog started in March of this year.  Therefore, at the time, I was unable to share the brilliant Christian Pulisic tifo rolled out by the American Outlaws before the US-Mexico World Cup Qualifier in Columbus during November 2016.  Though I have attended some friendlies, this was the first qualifier between the two countries that I attended in person.  Though the Tifo was great…the result certainly wasn’t.  In any event, here it is for historical memory and posterity: