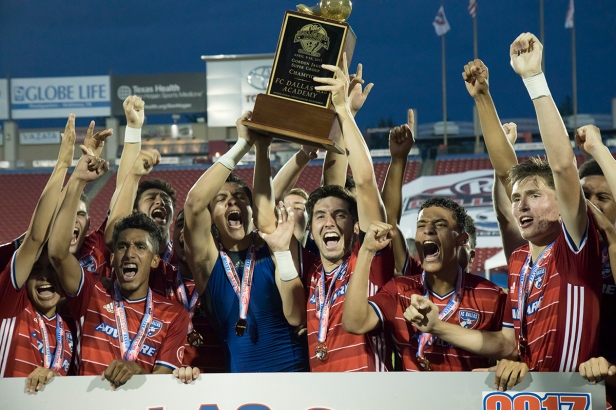 Earlier this month the US Soccer Development Academy (USSDA) began the 2017/2018 season throughout the country.  The Boys Development Academy was started in 2007 and this year has begun a girls academy that follows similar philosophies and competitive structures as the boys program.

There are eight Texas youth clubs that participate in the Development Academy at various age levels (the Houston Dynamo, Dash and Dynamo Youth-formerly Texas Rush-are grouped as one club for this discussion).

The U12 boys play in a stand alone Texas Division.  The remainder of the clubs and teams play in the Frontier Division, which includes other clubs from the Midwest and Colorado. Each team plays home and away games against the other teams in their division, plus games against non-division opponents from across the country during the 10-month season.  Playoffs, culminating in a National Final Four, are held at the conclusion of the regular season.  Last year the semifinals in the older boys divisions included both the U16/17 and U18/19 FC Dallas teams and Texans SC from Houston, who won the national championship in Carson, California at that age level.

Listed below, with links to the individual club page on the US Soccer Development Academy website, are the Texas clubs who are part of the Academy.

Rise Soccer Club (U12 only)