Saturday night in Houston, the first of three matches in the 2018 Texas Derby between FC Dallas and Houston Dynamo will be played at BBVA Compass Stadium.  As the rivalry is resumed, it is worth remembering that 51 years ago the first Texas Derby matches were played by the first two professional soccer teams from Texas to play in a national soccer league.  At that time this was the only Dallas-Houston professional sports rivalry in existence, as there were no professional sports teams in the two cities that played in the same league at that time.  Competitive amateur soccer matches had been played for a number of years between North and South Texas teams, but this was the first time professional teams from Dallas and Houston had ever met.

In 1967 a national professional soccer league began play in Texas for the first time. Domestic interest in the 1966 England World Cup, won by the home country, convinced a number of owners of teams in other U.S. professional sports that soccer could make money, or in any event help them fill open dates in the stadiums they owned.  So in typical historical fashion for soccer in the United States, after these owners couldn’t agree on the structure of a new league, they formed two of them and went their separate ways.  Two of these rich owners, Judge Roy Hofheinz in Houston and the legendary Lamar Hunt in Dallas, established teams in Texas that joined the United Soccer Association (USA), the league that was officially sanctioned by US Soccer.  This new league began play, using a short-season tournament format, in May of 1967.

The USA intended to start play in 1968, but because the rival National Professional Soccer League planned to start in 1967, the USA decided to also start up in the same year and this last minute decision required owners to assemble teams on short notice.  Given the shallow pool of American soccer talent at that time, the United Soccer Association decided instead to import complete teams from Europe and South America, and position them as franchises in various cities in North America.  The Houston team was named the Stars, but actually was Brazilian side Bangu Atletico Clube from the western zone of Rio de Janeiro.  The Dallas team, called the Tornados, was in reality Dundee United from Scotland.

A crowd of 16,431 showed up to see the opening Derby match between the Tornado and Houston Stars that ended in a scoreless draw.  The Tornados had won their opener on the road in Chicago and the Stars tied their first match against Los Angeles at the Houston Astrodome.  According to the Dallas Morning News, Houston flew into Dallas the day before and trained at the Cotton Bowl that evening.   They also brought a strengthened roster as many of the top players were still in South America when the Stars opened the season the previous week. (1)  The city was aware of what was going on as Dallas mayor Erik Jonsson had issued a proclamation declaring the week of May 28-June 4 “Soccer Week in Dallas”. (2)  The attendance was better than expected, given the lack of any appreciation for soccer in Texas at the time.  It helped that ticket prices ranged from 75 cents to $3.00 at the Cotton Bowl, affordable even back then.

The mystery for spectators attending this first Texas soccer Derby was expressed in this game report from the Grand Prairie Daily News on June 6th. 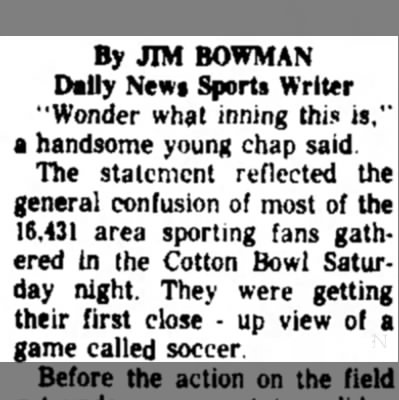 According to accounts in the excellent book Summer of ’67 about the 1967 United Soccer Association by Ian Thomson, the game struggled to gain any traction early as the players adjusted to the heat and the narrow Cotton Bowl field, which only allowed 60 yards of space vs. the 75 yards available today at FC Dallas’s Toyota Stadium in Frisco.  Despite the size of the field, a couple of Tornados players told columnist Sam Blair from the Dallas Morning News a few days before that they were pleased with the condition of the turf at the stadium. (3)  The game report by Charles Clines in the Denton Record-Chronicle reported that the Tornado controlled the game early, but midway thorough the first half the Stars came to life and forced Tornado goalkeeper Sandy Davie to make three saves, including two back-to-back saves on shots by Stars high-scoring forward Paulo Borges. (4)

The halftime break was originally scheduled to last 45 minutes, but was shortened to 10 after player complaints.  The Highland Park Lassies Bagpipe Band was the pregame and halftime entertainment.  Highland Park cheerleaders were also on hand to add to the opening game festivities but reports indicated that they were subdued by the end of the game as they worked pretty hard.

According to game accounts, the Tornado controlled play in the second half and scored a goal that was disallowed by a dubious offside call.  Tornado Jackie Graham scored the overruled goal from the top of the goal box past Stars goalkeeper Ubirajara, off what would have been an assist from Norwegian forward Finn Seeman.  The Dundee United Director traveling with the team, Jim Littlejohn, told correspondent Roy Edwards of the Dallas Morning News after the match “It was a good goal.  Seeman wasn’t offsides when the ball was played”. (5)  The crowd agreed, “The referees are as as mean as they are in our football, aren’t they.” Mrs. J. Frank Holt was quoted as saying when she gave an earful to the referees after the disallowed goal. (6)  The Stars missed two golden opportunities to pick up the full three points near the end when forward Cabralzinho missed a shot at an open goal and hit the crossbar later on a follow up after a poor clearance.  The fans apparently got into the spirit of the game, chanting “Score, Dallas Score!” near the end of the scoreless match.  How about that for a modern supporters group chant!  It must have been an entertaining match as the Tornado outshot the Stars 24-18, but the match ended at 0-0.

Dallas goalkeeper Sandy Davie and outside right forward Mogens Berg were cited by Tornado manager Jerry Kerr as having played excellent games.  Davie also had definite opinions on who was the most dangerous Stars player was on the night “They’re a good side, very smart.  Their right-half (Ocimar) was the best player.  He was brilliant.” (7)  Davie was named the Man of the Match and awarded a Sports Jacket from a local Dallas clothing store for his efforts. (8)

Houston goalkeeper Ubirajara faced 24 shots and earned the shutout, despite not being expected to play after he was hurt late in the opener in Houston the previous weekend.  The Bangu goalkeeper was one of a number of top Brazilian players on the Stars roster, some of whom played for the National Team.  Before the tournament he had just been transferred from Bangu to Independiente of Argentina for a princely (for those days) sum of $85,000. (9)  Interestingly enough, a few days after the June 10th rematch, reports came out that Ubirajara apparently decided to decline the offer in Buenos Aires and remain in Houston.  He ended up playing 10 games for the 1968 version of the Stars, who played a single season in the North American Soccer League before Judge Hofheinz threw in the towel and folded the team.

Imagine how often this mix-up would have aired on SportsCenter or shared via social media if it had happened today.

The match box score from the Denton Record-Chronicle game report: 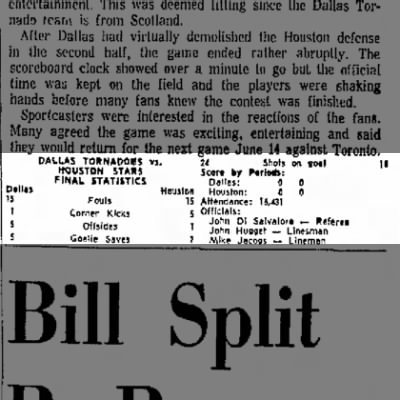 The Houston Stars won their first game of the USA tournament in the Texas Derby rematch 2-0 before 20,375 in the Astrodome.  Goals were scored by Peixinho, off a cross from Aladim, and Paulo Borges, assisted by Peixinho, in the first half to secure the victory.  Houston outshot Dallas 20-13 on the night.  The game story from AP has further details below, but in Summer of ’67, author Ian Thomson focused most of his match description on the challenges Dundee United faced playing indoors and on artificial turf for the first time.

The Astrodome “soccer” field configuration presented complications for both teams, but especially the visitors.  The field surface, set up for baseball a few days later, was a combination of dirt and grass, complete with holes where the bases had been removed. Also in Summer of ’67, Tornado player Mogens Berg attributed part of the issues to not having the appropriate shoes, stating that the Tornado players had not been informed about what type of field was used in the Astrodome before the match:  “We didn’t have the right shoes for playing on that.”  Because it was there, of course, once the Tornados came out of the locker room they had to organize a competition to see if anybody could hit the roof with a soccer ball, which they quickly determined was impossible.

To add insult to injury, Dallas had played a midweek game in Vancouver three days previously (which they lost) and then traveled by bus to Houston.  Before the players expressed their dissatisfaction, the Tornado management had planned to bus down the day of the game and return to the dorms at SMU (where the team stayed for the early part of the season) immediately after the game ended.  The team ended up coming in a day early, but still rode the bus back to Dallas Saturday night, arriving at 4:15 a.m. the next morning. (11)  The team was also missing leading forward Finn Dossing, who had picked up an injury in the midweek game.

The Stars, despite having what many thought was the most talented roster in the league, were winless to this point after losing a midweek match also.  According to the Dallas Morning News, Houston General Manager Owen Martinez, who was unable to communicate with his Portuguese speaking team, expressed his displeasure before the game by by ripping pictures of his players off the wall and tearing them to shreds.  Morning News Correspondent Bob St. John ended his match by reporting that Dallas Public Relations Man Gene Wilson said after the loss that he was going to tear Tornado pictures to shreds before the next match himself.  (12)

For those interested in learning more about the first National Professional Soccer leagues in the United States, I highly recommend two books, the above referenced Summer of ’67-Flower Power, Race Riots, Vietnam and the Greatest Soccer Final Played on American Soil by Ian Thomson and The Rebirth of Professional Soccer in America-The Strange Days of the United Soccer Association.