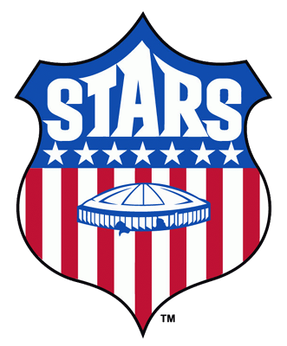 Fifty years ago this month, the first and only season (tournament) of the United Soccer Association (USA) came to an end.  The USA was the first professional soccer league in North America that included Texas teams: Dallas Tornado and Houston Stars.

The league was one of two professional soccer leagues formed in the United States in 1967 on the heels of a positive reception to televised games from the 1966 FIFA World Cup held the previous summer in England.  Because the USA was forced to start up earlier than intended because of the rival NPSL, the owners imported foreign teams to represent their cities, in our case Dundee United from Scotland for Dallas and Bangu from Brazil for Houston.

All 12 teams in the league played 12 rounds in the tournament.  The two Division winners, Washington Whips and Los Angeles Wolves, played in the President’s Cup Championship game in Los Angeles on July 14th.  Both teams flew across the country from Washington for this game, because the league had ordered a replay of a match played by the two sides in D.C. three weeks earlier on the weekend before the Championship. The reason for the replay was because league rules allowed 3 substitutes, one of which had to be a goalkeeper.  Los Angeles had substituted 3 field players in violation of these rules during the original game.  The Wolves lost the replay after the initial disputed match had been a 1-1 tie, but still won the Western Division.

The championship game was billed as The Greatest Soccer Final Played on American Soil in the book Summer of ’67 by Ian Thomson, a full-season account of the United Soccer Association. Arguably, he may be right as the LA Wolves won a pulsating 6-5 game and thus became the inaugural (and only) USA Champion.

Close to 18,000 fans turned up at the LA Memorial Coliseum to watch the Championship match, more than twice the season average for Wolves game in the tournament.  Both sides didn’t much like each other and issues from the previous hotly contested games produced battles that started within minutes of the start of the game.  The teams traded goals all evening and 6 lead changes later, the LA Wolves won the match in extra-time on a deflected own-goal off of Whips defender Ally Shewan.  At least Shewan was able to have a sense of humor when interviewed after the game, saying in the book The Rebirth of Professional Soccer in America by Dennis J. Seese, “That’s my only claim to fame.  I scored the golden goal.  For the wrong side”. Shewan also can be given a pass because early in the game he had been knocked out, bloodied his nose and also broke two fingers on a collision with a Wolves forward.  It is truly remarkable that Washington was able to come back so frequently because they had been reduced to 10 men 32 minutes in the game.

The Houston Stars were characterized as the most technically gifted team in the tournament. In The Rebirth of Professional Soccer in America, Sunderland and Vancouver’s John O’Hare was quoted as raving about Bangu and the Stars “their skill level was superb” and gave them a “proper football lesson” after Houston beat them 4-1 in Round 7.  The Stars were led by Paulo Borges, who some at the time considered the second or third best player in the world after Pele and Portugal’s 1966 World Cup hero Eusebio. Houston also had two other Brazilian internationals on their roster, World Cup veteran centerback Mario Tito and Cabralzinho.  This talent came with responsibilities for their country though and the Stars lost Paulo Borges to a series of matches Brazil played against Uruguay midway through the tournament. Borges missed 4 Houston matches (3 of which Houston lost). An argument certainly can be made that Houston did not make the Championship game because of his absence.  The biggest blow to the Stars hopes came in Round 11 when, still missing Borges, the team shockingly lost 3-1 on a rain soaked and muddy field to Boston, who had not won a game to that point. Even the return of Borges was not enough to help the Stars the next week as a 1-0 loss at the Astrodome to Washington effectively ended its season.

The major excitement in the Stars season came in Detroit during Round 6 of the tournament. The Stars had taken a 2-0 lead on the Detroit Cougars (Glentoran from Ireland).  The clashing styles of a technical and crafty Brazilian side vs. a hard working Irish side finally came to a head in the 73rd minute after a high boot to the head from a Houston player led to a head butt from a Detroit player.  Flying kicks, corner flags used as weapons, staff from both teams leaving the sidelines to join the ruckus and fans coming onto the field to chase Houston players around then ensued.  It took 10 minutes for the police to restore order and the match was abandoned with the Stars credited with a 2-0 victory, despite vigorous protests from the Cougars.

There was one other amusing story that highlights the amateur level of organization in the USA that year.  When Houston played Cleveland later in the tournament in the Astrodome, the game ended with no explanation with more than 5 minutes remaining on the stadium game clock. Apparently, the clock official, who didn’t know any better had been stopping the clock when the ball left the field of play.  Houston ended up winning 2-1 that game despite vehement Cleveland protests.

The Stars ended the season in fourth place (4-4-4).  The team also had the highest average attendance in the USA at 19,082.  It was hard to sort out how much of the good attendance, however, was due to the soccer games and how much should be credited to the newness of the Astrodome at that time.

For historical purposes, an argument can also be made that forward Paulo Borges is the best player ever to play soccer for a Texas professional soccer team (a case certainly can be made too for legendary England international Bobby Moore who played for the NASL’s San Antonio Thunder in 1976).  He scored 105 goals for Bangu in the Brazilian league.  At that time Brazilian players did not go to Europe at a young age like happens routinely today. Brazil was recognized as having one of the best, if not the best, soccer leagues in the world at that time.  Pele, for example, who was in the prime of his career in 1967 never played in any European league.  Borges ended up leaving Bangu a few years after this tournament, as did many of the Bangu stars, to chase more lucrative money at bigger Brazilian clubs. Bangu never became the club it was in the 1960’s again and now plays in the fourth division of Brazilian soccer.

In any event, after the two start-up leagues merged to form the North American Soccer League (NASL) in late 1967, the Stars joined the new league for a single season, finishing second in the Gulf Division of the Western Conference, but didn’t qualify for the playoffs. After that season, Houston was one of the many NASL franchises that folded and no professional soccer was played again in Houston until the Houston Hurricanes joined the NASL for the 1978 season.

Regardless of their short existence, the Houston Stars remain the genesis of the current professional soccer landscape in Houston, now represented by Major League Soccer’s Houston Dynamo and the National Women’s Soccer League’s Houston Dash.

Details on the formation of the league and the Houston Stars can be found in my first post in this series:

Further information on the formation of the Dallas Tornado and the first two professional Texas Derbies can be found in the second post in the series:

I am indebted to two excellent books that provided the majority of information presented in this post.  I highly recommend anybody interested in further information seek these books out:

The Rebirth of Professional Soccer in America-Dennis J. Seese