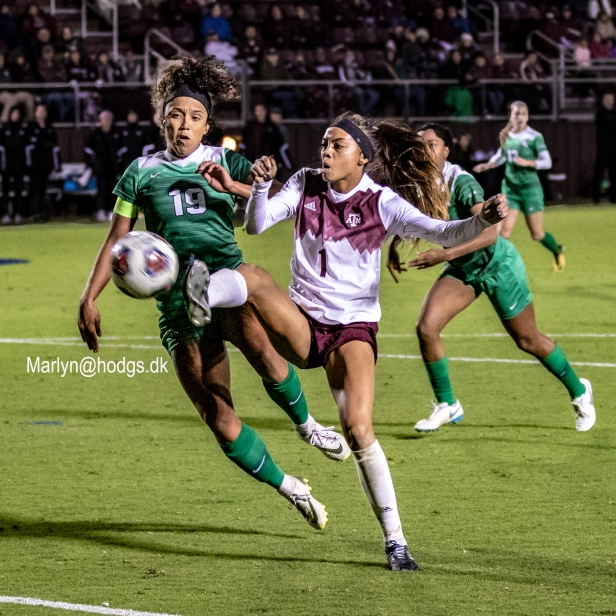 In a full slate of NCAA College Soccer opening weekend Tournament matches eleven Texas teams won and moved on to the next round.  After second round games, nine teams remain to play next weekend.

A 109th minute golden goal from Ally Watt led the Aggies to a tight 1-0 win over UNT Friday night.

On the UNT website coach John Hedlund talked about how dangerous Watt was “I told them before halftime, even, that if they were going to score on us it’d be [Watt], she’s that good.  We wanted to match up on her tight and have Dom behind her. She got loose on us with a couple of minutes to play, and she made us pay. She’s a great player.”

UNT goalkeeper Kelsey Brann, a Freshman from the Houston area, made 11 saves to keep the game close until one minute before time and a penalty shootout.

Texas A&M advances to play TCU in the second round on Friday in Knoxville, TN.

TCU won its first NCAA playoff game in the school’s history Friday night.  After falling behind in the 23rd minute, two second half goals from Dallas-native Messiah Bright and Yazmeen Ryan led the Horned Frogs to the win.

TCU advances to play Texas A&M in the second round on Friday in Knoxville, TN.

Texas Tech Sophomore Kirsten Davis had a hand in all three goals as the Red Raiders won convincingly Friday night.

Texas Tech advances to the second round and will play #12 ranked Virginia in Durham at 12 p.m. CST on Sunday.

#11 Baylor dominated Abilene Christian Saturday night to advance to the second round.  Goals in each half, from Coppell-native Sarah King in the first and Camryn Wendlandt in the second, led the way.  The Bears outshot ACU 22-2 on the night.

🎥 Check out some of the highlights of tonight’s dominating 2-0 win over ACU, punching BU’s ticket into the Round of 32 #SicEm #FaithFamilyFutbol pic.twitter.com/ekYLaHUkbN

Baylor advances to the second round and will host #13 Vanderbilt on Friday in Waco.

UT was the only Texas Division I school to not advance as they lost on a 67th minute goal from Bridget Patch.  The Longhorns end the season 13-5-3.

West Texas A&M advances and will play Colorado Mesa in the third round in Azusa, CA on Thursday.

West Texas A&M and Dallas Baptist advance and play each other in the third round in Canyon on Friday.

Trinity now advances to the third round and will play the University of Chicago in Chicago, IL on Saturday

The Mustangs will now travel to Corvallis, OR to play Oregon State in an opening round match on Thursday.

Back-to-Back #AmericanMSoc Championships for @SMUSoccerM! Emil Cuello sealed the title for the Mustangs in Penalty Kicks – the second year in a row Cuello has provided the title-clinching score for SMU! pic.twitter.com/N6adEHgTHg