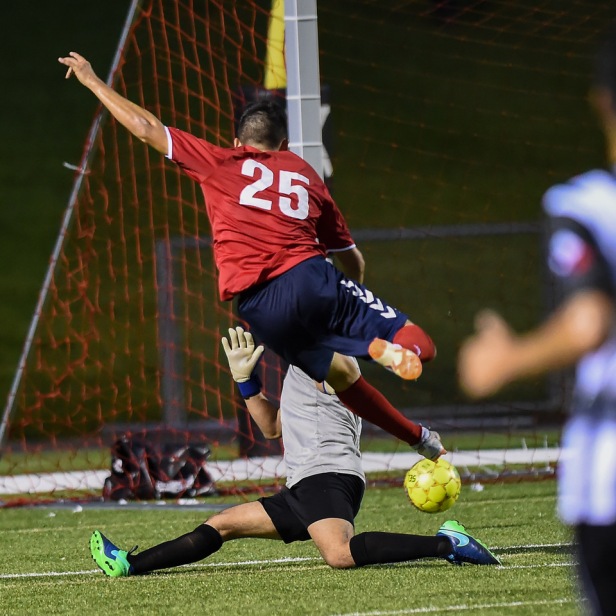 Travis Aday is a senior Communications major at University of Mary Hardin-Baylor in Belton.  He is a member of the soccer team there and is spending his summer interning with NPSL’s Katy 1895 FC Soccer Club….and also is a goalkeeper on the team.  Texas Soccer Journal is proud to publish his posts for the remainder of the season.

KATY, Texas – Katy 1895 FC was back at home for the first time in two matches, taking on the Houston Regals at 7 o’clock at Rhodes Stadium in Katy, Texas. Katy turned their fortunes on Tuesday night and broke a four match losing streak in stylish fashion beating the Houston Regals by a score of 9-1. The win improved Katy’s record to 2-0-5 on the season while the loss dropped the Regals’ record to 2-0-6.

Katy 1895 FC scored nine goals on Tuesday night, more than doubling their season goal-scoring record and somewhat salvaging a poor goal difference. Heading into the match, Katy had only scored six goals in six matches and had a -12 goal difference. The match was a breakout performance to say the least by Katy.

Having to switch fields last minute due to heavy rainfall in the area, the match was moved from St. John XXIII to Rhodes Stadium. The weather stayed dry during the match, but it for sure rained goals. The match got off to a quick start with the first goal coming just 15 minutes in as Sergio Loredo, sent through by Josh Moore, was taken down just inside the box drawing a penalty. The defender that committed the foul was subsequently sent off and the Regals finished the match a man down. Tutu Hernandez took the penalty and struck it with pace into the top right corner to take the 1-0 lead. It looked as though this would be another typical match for Katy 1895 FC, however as the Regals equalized two minutes later in the 17th minute, bringing the score to 1-1. Devon Grant pulled Katy back ahead in the 20th minute, heading in a corner from Hernandez to bring the score line to 2-1. In the 23rd minute, Moore sent Loredo through again and he was able to finish calmly to take a 3-1 lead. It appeared that Abdullah Mirza scored the fourth goal for Katy on the night, in the 35th minute finishing a cross from Loredo but it was whistled for offside. Not shortly after, Katy did score a fourth as Alan Albornoz threw a ball into Hernandez who beat his defender and slid the ball to Moore who then beat another defender and placed his shot back-post to take the 4-1 lead. In the 40th minute, Roger Lopez would tack on his first assist of the night, beating two defenders and sending in a low cross to Moore who finished for his second goal of the match. The first half ended with Katy 1895 FC ahead 5-1.

The second half was similar to the first with no shortage of goals. In the 50th minute, Mirza’s goal would stand finishing side-net from an assist by Loredo after a bit of brilliance as he spun a defender and megged another. Katy scored again in the 54th minute when Hernandez sent Loredo through on goal who finished through the goalkeeper’s legs to bring the score to 7-1. The match went into a little bit of a lull until the 81st minute when Tristan Duffy scored on an assist from Lopez to make it 8-1. Lopez got on the scoresheet just into stoppage time as he played a one-two with Tomas Depetri, scoring to the bottom right. The match finished 9-1, with seven different goal scorers and six others tacking on assists. Josh Moore and Sergio Loredo had two goals and one assist, Tutu Hernandez and Roger Lopez had one goal and two assists, Devon Grant and Tristan Duffy and Abdullah Mirza had one goal and Alan Albornoz and Tomas Depetri had one assist each.

Katy 1895 FC featured 15 players in the match with starters being Harrison Veith, Sydney Tume, Devon Grant, Tyler Sivadon, Alan Albornoz, Josh Moore, Luka Lazarevic, Roger Lopez, Sergio Loredo, Abdullah Mirza and Tutu Hernandez. Jordi Cobo, Tomas Depetri, Kelechi Onyewuenyi and Tristan Duffy made appearances off the bench. Man of the match is midfielder, Josh Moore with two goals, one assist and a dominant showing in the midfield. Josh is going into his senior season at the University of Illinois-Springfield.

After the match, head coach Jimmy Krueger said, “it was good for the guys to get off to a fast start. We have not been lacking scoring opportunities throughout the season. We just needed to find the proper quality on the final touch more consistently. The guys are starting to get it. We are continuing to come together to put a solid product on the field. We will continue to push to improve each passing week.”

Katy 1895 FC has the weekend off and is back in action on Wednesday, June 27, at St. John XXIII in Katy, Texas versus the Tyler FC Kings at 7 o’clock.