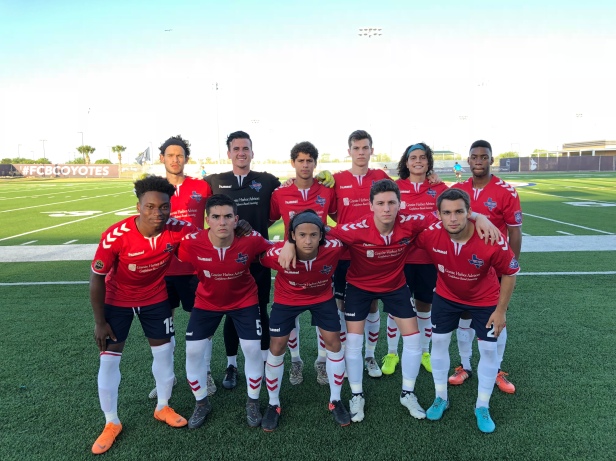 Travis Aday is a senior Communications major at University of Mary Hardin-Baylor in Belton.  He is a member of the soccer team there and is spending his summer interning with NPSL’s Katy 1895 FC Soccer Club….and also is a goalkeeper on the team.  Texas Soccer Journal is proud to publish his posts for the remainder of the season.

BROWNSVILLE, Texas- Katy 1895 FC took on FC Brownsville Saturday night at 7 o’clock at the Brownsville Sports Park in Brownsville. The match would be a tough one for Katy as Brownsville would go on to win 4-1. Katy, coming off their first win against the Houston Dutch Lions last weekend would drop to 1-2 on the season while the win took Brownsville to 2-1.

The match was relatively back and forth in the initial stages and Katy did well finding a few opportunities early on and holding the Brownsville attack at bay. Goalkeeper, Harrison Veith, was called on often in this game and in the 19th minute would come out and stay big, making the save, to preserve the 0-0 scoreline. Brownsville were keen on finding the breakthrough, however, and would go ahead in the 24th minute, 1-0. Katy would keep pushing and less than 10 minutes later in the 33rd minute, they drew a penalty. A good switch from left to right found Donnovan Smith who cut inside and slid the ball across to Jordi Cobo who was taken down inside the box. Cobo would take the kick, whose initial attempt was saved. He collected the rebound and calmly slotted the ball into the back of the net for the equalizer and his team-leading second goal of the season. The scoreline did not last long though, as Brownsville would score the go-ahead goal in the 37th minute, taking the 2-1 lead. Katy, pushing for another equalizer in the first half would get caught out on the counter attack in stoppage time and allow the third goal, falling behind 3-1 just before halftime.

Katy would control much of the first 30 minutes in the second half, finding several opportunities, but were not able to convert their chances. Katy would concede a penalty of their own in the 78th minute, which was finished by Brownsville to take the 4-1 lead and effectively putting the game to bed. Neither team would score again and the match would finish 4-1.

Our man of the match was Jordi Cobo, a sophomore midfielder from Houston Baptist University, who went for 90 minutes and scored the lone goal.

About the match, head coach, Jimmy Krueger said, “we put ourselves in an early hole tonight and weren’t able to recover from it. Moving forward, we need to do a better job of putting it all together. Our work-rate across the lines will improve. Our intensity throughout the entirety of the match will increase. We will have a tough week of training ahead of us as we prepare for another quality opponent.”

Katy 1895 FC will be back in action next Saturday, June 2nd, at 7 o’clock versus Midland-Odessa Sockers FC at St. John XXIII Preparatory School in Katy, Texas.