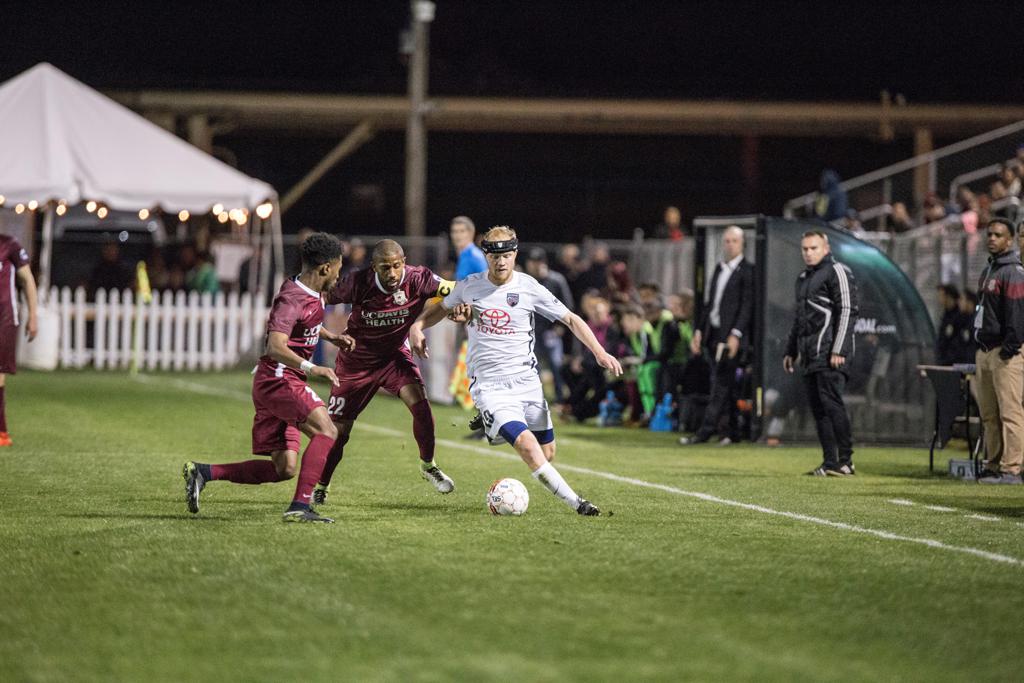 2018 has and will continue to be a strange year for soccer in the United States.  For the first time in 38 years a FIFA World Cup will take place this summer without the participation of the U.S. Men’s Soccer team.  The failure to qualify for this tournament has led to a major shakeup in US Soccer leadership, including the election of a new President, a restructuring of the technical side of the organization and resignation of the head coach.  Locally, the attempt to relocate a Major League franchise to Austin by the owner of the Columbus Crew for the 2019 season has led to a soap opera like series of events in both Austin and Ohio, leaving in question whether the relocation of the Crew to Texas will ever happen.

All of this off-the-field turmoil doesn’t change the fact that on-the-field soccer has returned for our local club, San Antonio FC (SAFC).  The club began play in the 2018 United Soccer League (USL) season last Saturday with a 2-1 road loss to Sacramento Republic.  The home schedule begins at 7:30 p.m. this Saturday night when Saint Louis FC comes to visit.  Optimism for the new season is high as league prognosticators have again identified SAFC has one of a handful of teams best positioned to lift the USL Cup in November.

Owned by Spurs Sports and Entertainment, San Antonio FC plays a 34-game regular season schedule that stretches from March to October, followed by playoffs if it qualifies.  In the third year of its existence, the team plays its home matches 20 minutes down I-35 at Toyota Field, an 8,000-seat soccer specific stadium.  Though the relocation activity in Austin has put a crimp in its plans, San Antonio FC and the Spurs are also currently bidding to be one of the two announced expansion teams MLS intends to award in the next year.

The 2017 season ended on a down note as SAFC was eliminated from the Western Conference semifinals last October in a dramatic penalty shootout by OKC Energy.  The unfortunate finish to the season should not detract from the outstanding 2017 season enjoyed by the home side.  A second-place regular season finish by the locals was capped when Sebastian Ibeagha was named as the USL Defender of the Year and Diego Restrepo as Goalkeeper of the Year.

Last year’s strong performance led the club to maintain a degree of stability in the 2018 roster that typically is not seen in USL.  To begin the season SAFC has brought back Head Coach Darren Powell, his coaching staff and 17 players, including goalkeeper Restrepo, from last year’s team.  The biggest losses will be Ibeagha, who moved up to MLS’s New York City FC, leading scorer Billy Forbes who joined USL’s Phoenix Rising and 2017 team captain Michael Reed who left for the new USL expansion team in Nashville.  In addition to the benefits of a full season from key additions who joined in the middle of last year, the club has used the offseason to reload with experienced USL veterans and former MLS players to fill gaps in a roster, one that will be the deepest in the short history of the franchise.  Midfielder Ryan Roushandel, who has been with SAFC since the beginning, will serve as the club’s captain this year.

One of the most intriguing roster additions is 16-year old Ethan Bryant, the first product of the San Antonio FC Development Academy.  Unlike most major sports leagues who build rosters primarily from the high school and college ranks, soccer teams globally produce most of their players from academy programs run by professional clubs.  Rapid growth of a similar academy system in the United States mirrors the increasing stability and ascension of professional soccer leagues here.  From the club’s start up in 2016, SAFC has invested in an Academy program and will field youth clubs at four age levels (U12-U15) in 2018.  Bryant is the first of what the club hopes will be many home-grown players on future rosters.

Despite the season opening road loss, the team has quiet confidence that the results could be very positive this year.  During an undefeated preseason, SAFC challenged itself by travelling to Dallas and Arizona to compete against MLS teams and certainly held its own in both matches-a win against an FC Dallas reserve team and a draw with the New England Revolution.

At the club’s Media Day in late February, head coach Darren Powell expressed the potential he sees in this year’s club.  “I think we have a good balance in the squad.  The good piece is with having so many returning players, we are not actually starting from ground zero.  That experience will be good, especially at the start of the year.”  When asked about his expectations for the 2018 season Powell tempered the excitement a bit and stressed that the focus needs to be on progress for what is still a young club.  “What we need to do each year is try to progress with on-field performance.  The organization is very ambitious to show progress, but we are still in year three.  The one thing (with this season) is that there is familiarity with the team.  We are not going to sneak up on anybody this year.  We do have high expectations and want what is the best for this club and this city.”

Saturday night will be the first chance for local fans to see if roster stability and increased depth will translate into success on the field.  The USL has grown by leaps and bounds over the last few years, both in the number of teams (including a 2019 expansion team in El Paso and an announced team in Austin) and increased quality of play.  The bar has been raised for SAFC, but the club appears to be keeping pace and hopes are high that this could be a special season.