The regular season of the Texas Premier Soccer League (TPSL) culminates this Saturday when Galveston Hurricanes FC and Twin Cities FC from border city Eagle Pass compete for the TPSL League Cup Final in San Antonio.  The match will kick off at 4:00 p.m. at Tapatio Soccer Complex.  Stadium location details are in the image at the bottom of this post.

The original TPSL was formed in 1997 and folded ten years later.  The league came back to life and resumed play in 2013 with 6 clubs.  TPSL is the only high-level amateur league in the state that consists of teams solely based in Texas.  This will be the fifth year that the League Cup Final will be contested in the reformed league.  A new champion will be crowned for the 2017/18 season since three-time defending Cup holders Austin Real Cuahutemoc were eliminated in the semifinals this year.

How the teams got here:

The two sides split the games played, with both teams winning on the road.  Twin Cities 2-0 and the Hurricanes 3-1 (the only loss suffered by Twin Cities FC all year).

Center Back:  Eloy Obergon:  Team Captain and longest serving player-8 years-played with the club when they competed in the NPSL

Defender and Midfielder:  Jerson Carrasco-versatile player who is a Teacher and Coach at Texas City High School

Goalkeeper:  Tyler Garner-Vice Captain and has played with the Hurricanes for 6 years-also part of the club that played in NPSL 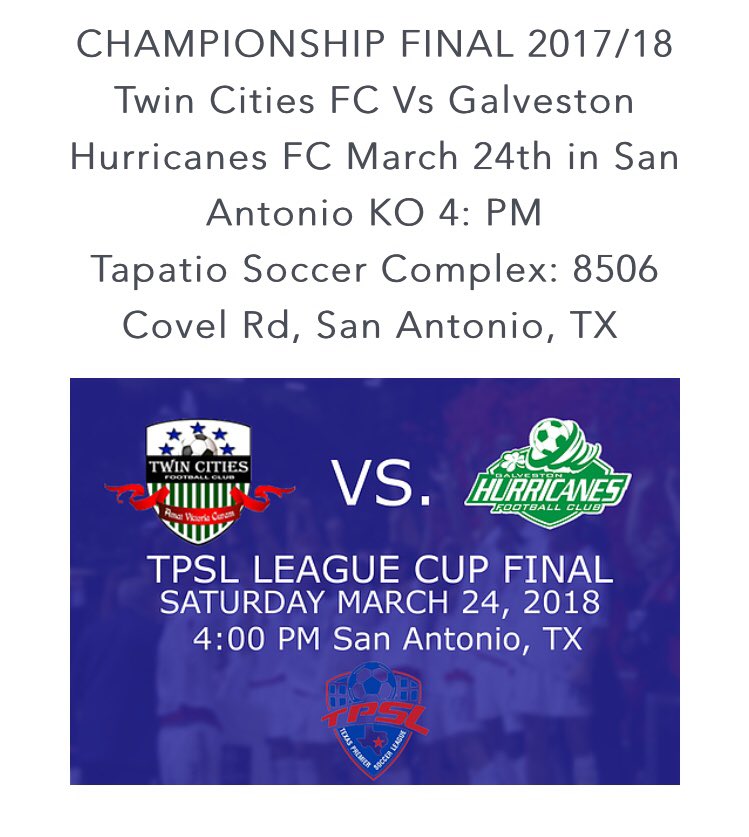