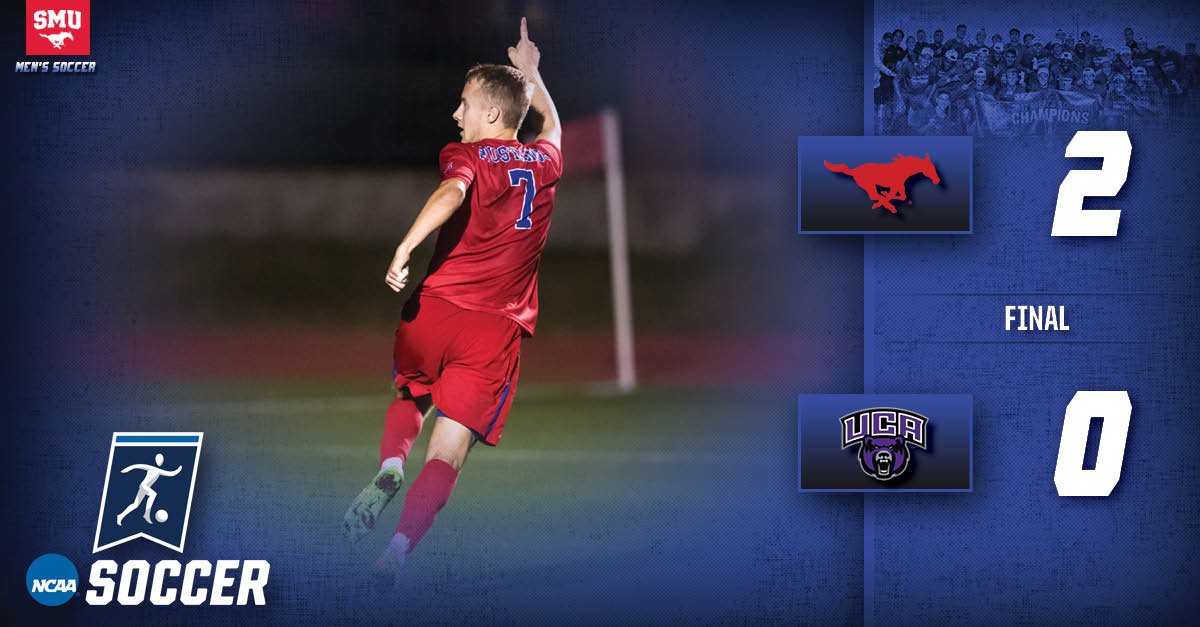 After a scoreless first half, the initial shot of the second produced the game winner for SMU in a 2-0 victory over Central Arkansas at Westcott Field in Dallas.  Garrett McLaughlin scored (his team-leading 14th of the season) in the 50th minute to give the Mustangs all they needed to advance to the next round of the tournament.  A 78th minute goal from Christian Boorom ended any hope of a Central Arkansas comeback .

Baylor advanced to the second round of the NCAA tournament when they defeated USC on penalties in College Station Friday.  It took 72 minutes of scoreless action before the Trojan’s Leah Pruitt opened the scoring.  The Bears Sarah King scored in the last minute of regulation off a scrum in front of the goal, however, to level match and send it to extra-time.  Baylor converted three penalties (Caitlin Schwartz, Delanie Davis and King) and USC missed all of their spot kicks sending the Bears to the next round.

Baylor now advances to play Notre Dame in the third round on Sunday at 6 p.m. in College Station.

Texas A&M also saw their match go to penalties, but unfortunately the results were not as favorable for the Aggies.  Their 2017 campaign come to an end Friday when Notre Dame prevailed on penalties (4-1) in the end.  The Aggies had taken a first half lead when Mikaela Harvey scored in the 37th minute.  Notre Dame scored the next two to take the lead (the second coming on a penalty in the 83rd minute), but Emily Bates scored a dramatic 88th minute goal, off an assist from Addie McCain, to level the score and send it to overtime.  20 minutes of overtime did not produce a winner, so unfortunately the crap-shoot that is a penalty shootout was required to bring the match to an unfortunate end.

Yet another round of penalties were needed to decide the match between the University of Texas and Clemson in North Carolina Friday.  The Longhorns made it two victories out of three for Texas women’s DI sides when they defeated the Clemson Tigers in seven rounds of penalties 1-1 (6-5 penalties).  Cyera Hintzen opened the scoring (her 10th of the season) in the 61st minute when she chipped the ball over the keeper.  A late volley from the Bears Patrice Dipasquale evened the match three minutes before time.  The score was level after the prescribed 5 rounds and extras were needed.  After Paige Hooper converted in the seventh round, Longhorns goalkeeper Nicole Curry stopped the Tigers final attempt and unleashed a wild Longhorns celebration.

The Longhorns now advance to the third round and will play #3 ranked and host Duke in Durham at 12 p.m. CST on Sunday.

A 67th minute penalty from Patrick Fitzpatrick and a late goal from Ross Fitzpatrick led the nationally #1 ranked Midwestern State Mustangs to a 2-0 win over Colorado School of Mines in Wichita Falls on Thursday.  A nice run from Pierre Bocquet through the middle of the Colorado Mines defense led to the penalty which turned out to be the game winner.  Goalkeeper Taylor Lampe contributed six saves and lowered his season goals against average to 0.25 while improving to 10-0-1 in 12 starts.  The Mustangs claimed their ninth consecutive victory and was their 20th victory of the season (20-0-2).

The Mustangs now advance to play Cal Poly Pomona in the quarterfinals in Wichita Falls on Saturday night at 7 p.m.  The Broncos upset No. 2-ranked California Baptist 1-0 Thursday.

Hardin Simmons plays Carnegie Mellon at 12:30 p.m. CST Saturday in Geneva N.Y.  A preview of the matches can be found here:

The victor will play the winner of the match between host William Smith and Ohio Northern in the quarterfinals on Sunday.

After a 90 minute weather delay, the The University of Mary Hardin-Baylor men’s soccer team fell 2-1 to the Emory University Eagles in Chicago. The loss ends the Cru’s run in the NCAA tournament and concludes their historic 2017 season.  Emory took an early lead when Michael Carragher scored an unassisted goal in the 18th minute.  Only two minutes later, Carragher created the ultimate game winner which was headed in by the Eagles Christian Meyer.  Logan Keeler, off an assist from Case Carnes, scored in the 84th minute to cut the lead to one.  Despite late pressure from the Cru’s the equalizer never came and a successful season came to an end.